Roast Duck. It's What's For Dinner.

Saturday was round 7 of the Mud, Sweat and Gears Cyclocross Series and a beautiful day graced the event held at Steele Creek Park in Bristol, Tn. I have been trying to do three races: Masters 45+, Singlespeed, and CX4 to pimpslap myself into fitness. Last week the classes were spaced with about an hour between each. This week to allow time for collegiate races, the Masters race was first and the SS/CX4 races were at the end of the day and back to back.

I have learned from past experience that my body responds well to tough love when it comes to training. Having said that, I have never done back to back cx races before. On one hand, the back to back races in question are only 30 minute races and that was an hour and a half after the 45min Master's race so it's not that bad. On the other hand, this is cyclocross and my inner child was about to throw a tantrum.

After warming up a few laps on the Dwayne Letterman designed course that included one set of barriers and several off-camber down/up combos that would surely cause some consternation from the masses. I went to the line and, hmmm.... Seems a bunch of people got there before me and I was on the second row. Crap! I fought hard to get as close to the front as I could and I did ok. I was sitting in the top 5ish and stayed there until we got to one of the short n' steep dips. Somebody messed up and we suddenly had a donnybrook, a free-for-all. I scrambled to get going again asap and don't really know how many people passed me or where I was for that matter. I was irritated but hey, crap happens. I regained composure as quickly as I could and started searching for friends I could kill, hahahaha... The first buddy I saw was my brother from another mother - David Hayter. I watched him for a lap and saw that he was weak on the long climb from the finish line to the top of the course. I attacked him there and got a nice gap between myself and him plus several others that were behind us now. I was on the rivet and waaaaaaay down deep in my pain cave. So much so that about 2/3 of the way into the race, I blew a corner and allowed two people to get close and eventually past me.... CRAP!  I buried myself to try and get those spots back but to no avail, I ended up 9th.

I had about 1.5 hours until my back to back SS/CX4 events so I ate and hung out with cowbell in hand to cheer on some of my peeps. I wasn't sure what to expect, I left pretty much all I had out on the course in the Masters race. Hmmm. This was going to be interesting.

I grabbed my singlespeed and went for a ride around the venue and when the Pro 1,2 race was over, I hopped on course to see how I might feel. Having spent more time on my singlespeed in the past few years than any other bike, I always feel better and more relaxed on it. I love my Vassago. They nailed the geometry on them perfectly. Nothing handles like my Optimus. Therefore, I felt really good in the off-camber parts and the short, steep up/down stuff in the woods. On the downside, my legs were CRAP.
On the start, I went as hard as I could but didn't get a very good one. I was discouraged and resigned myself to the fact that it was what it was and I just need to deal with it. I did manage to catch and pass a few people and by the end of the race I had worked my way into 4th. Now for a jersey change, a quick swig of water and slam a Hammer Gel and a bike change.

I didn't even bother with riding a hot lap before the CX4 race. I was as hot as I could be and I knew the course like the back of my hand. I just rolled to the start line and waited.......
At the start, I did a solo break off the back and found myself alone and DFL by the time we got to the top of the hill. I contemplated quitting but then I remembered how much I'd hate myself later for that and figured I'd get all the pain and suffering over with in one day instead of dragging it out over several weeks. About 1.5 laps in and I started catching and passing people. This fueld me a little and I pushed as hard as I was able at that point. I caught a few more and made it up to 19th by the bell lap. I had no chance of catching anyone else but for craps and giggles I still pushed hard in the final lap and even sprinted across the line.
I thought I was gonna puke....

It was a good experience (that's easy to say two days after the fact) but I was really trashed afterwards. I am excited to see how much fitness I gain by the time round 8 rolls around Dec 4. 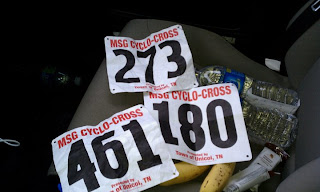 Pain comes in three's
After last weeks triumphant return to racing for me, I knew I had a looong way to go to feel like I was in somewhat decent shape. From riding my bike all summer at pretty much a tempo pace, I have a good base but I lack high-end fitness that you need to do well in racing. Above all other forms of bike racing, in cyclocross there is nowhere to run and nowhere to hide.

Round 6 of the Mud, Sweat and Gears Cyclocross Series rolled into Johnson City and Winged Deer Park Saturday. The threat of snow and frigid temperatures got me really excited and reminded me of the State Championship race at this same venue just 10 months prior where it snowed 4 inches. The snow held off but the cold was there to stay. Ahhh cross weather.....

My goal after last weekend is to race my way into decent fitness and try to do well in the upcoming State Champs race in January. With that in mind, I signed up for Masters 45+, CX4, and Singlespeed. The classes were staggered just enough to give me about an hour between each race. Just enough time to get cold and suffer more when it was time to race again, yummy! Having said that though, I don't think I am ready to go 1:45 at or above my AT just yet, nope I think I might just puke if I tried that. After a pseudo warm-up, I took the line for the Masters race where I got the holeshot -yay me!  I have learned from nearly 30 years of racing (good GOD I am old!!!) motorcycles and bicycles that the start is critical. Get a good start and go backwards if you must but it's a lot easier to stay at the front if you are already there. Plus you stay out of all sorts of trouble by getting a good start.

I had no intentions of staying at the front this day however and about half a lap in, I started making my way to mid-pack where I would set up shop for the next 40 minutes. I felt - meh... Not bad but definitely not good. Perhaps the only thing I had going in my favor was I was there, doing what I love and I was no longer cold! In fact, I was starting to roast and my tights were causing me problems on my remounts by getting caught on my seat several times and subsequently ticking me off. I pushed hard until the final meters of the final lap and then sat up and rolled across the line in 10th place. I headed to the dirty orange box that I drive to rest and get some fluids before the CX4 race.


I didn't get such a good start in the CX4 race and that was fine with me. I still felt some of the effort from the Masters race and was thinking that I was happy that this was just a 30 minute race instead of 45. By now the course was getting slick in some of the off-camber sections and in one corner I went down. It was nothing spectacular, I just fell over like a dork, costing me time and nearly costing me positions. I was determined to defend my 14th place or die. I just kept telling myself that I am training and these races don't matter, heck none of it really matters in the big picture. I don't have anything to prove... Try telling that to a competitive soul on a course with other people on bikes. I pin a number on and I change. Who doesn't?
Despite falling and having a few wardrobe malfunctions, I had a decent race and as far as training goes, I was having a great day. After the 4's I went to get a Coke and a smile and chill out until my final event - Singlespeed.


In SS I got a second place start right behind my pal, Neo-Pro Wes Lamberson who races for Union College. I knew I'd be following him only as far as I could so I just tried to settle in second and that soon became third then fourth (dangit) but I managed to stay there for the remainder of the race. At that point it was all about blue-collar suffering. I began to get real sloppy and fudged a few corners and tripped on the barriers at least twice. Training, training, training, I'm only training, I'm only training.... I kept telling my legs to shut the **** up (thanks Jens) and push onward. I pushed as hard as I could until the end. Everytime through the Redline run-up (a steep bank that was kinda slick), I attacked it like my life depended on it as opposed to a death march or crawl up it. Fitness is coming back to Duckman's house one way or another!

Three races hurt and I was really knackered at the end of the day, only speaking with one syllable words and using a lot of hand gestures. I was happy with how I did and am anxious for the rest/recover/rebuild cycle that brings on the gains in performance that I am expecting. I will get a chance to gauge my progress next week at Round 7.