Ah the things that goes through one's mind whilst riding in circles. After 18 months away from mountain bike racing, heck forget racing, from my mountain bike period! After 18 months away, I jumped back in head first at the H8R 8 Hour Race at Haw Ridge Park last Sunday. Part of the three race Tennessee Cup Series, the H8R featured some really nice singletrack that ranged from fast and flowy to hilly, rocky, rooty and dry, dusty slick. Having not trained a bit nor barely even ridden my mountain bike since a bad road crash a year ago, I was looking to just see what would happen if, and get my feet back in the endurance game.

I got there the night before the race and since I have ridden and raced at Haw Ridge bunches in the last 10 years, I felt no need to pre-ride. I put the Honda into caRV mode and sat down with a good book to read and waited.. The threat of storms (something East Tennesseeans take very seriously now in the wake of some recent deadly ones) had me a little nervous and I surveyed the area for the best tree to park my car under.I figured the one most likely to be struck by lightning or a tornado would be actually the one that would be spared so my logic seemed sound and I felt safe. Night y'all.. 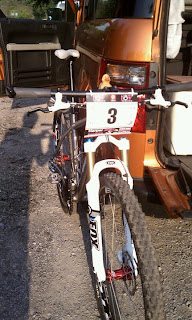 Sunday, race day. I was looking forward to getting on my bike and to see what I had left in the tank, so to speak, after not riding (I have ridden, lots, just on my road bike not my mountain bike. I wasn't sure what to expect). With raceday formalities despensed of, we lined up and hit the trail at 9:00am. I went into the woods about 7 back from the front and was greeted with a really rocky and rooty climb that should have been no problem but it drove me batcrap crazy! I couldn't find a rhythm and felt like a monkey f.....  uh, err,  nevermind. I slipped a few places due to my riding like a bull in a china shop and settled in somewhere... I don't know where. I was pretty much alone which was fine with me. I was trying to figure out where the heck I left my technical skills. Oh.... 18 months. Uh, yeah. Well I have some stuff to work on and a little rust should be ok huh?  *******!
I rode the first two laps non-stop and stopped on the third only long enough to change bottles. My pit crew was nowhere to be found, oh, I am my pit crew. Well nevermind. By my third lap, I felt much smoother on the rocky, technical parts and the big-ring stuff made me smile (uh..... big-ring. Yeah. After riding only singlespeeds for the last 6 years, I added a 2x9 drivetrain to my 2011 Vassago Optimus and I love it! Make all the jokes about female parts and my manhood if you wish. It's my bike and I'll ride what I want).

I began to really groove on my third lap, just in time for my legs to begin to complain and for a couple of blisters to form on spots that never used to get blisters and I got a little sloppy and bounced off a few trees slalom style (except these trees don't break away like poles on a DS course do.
At the end of my third, not knowing where I was (dang I need a pit crew to give me info), I stopped for some food, real food that I could chew. I was off my bike for about 10 minutes and headed out for lap 4. By now it was hot and my pace had went from "Greyhound" to "Dachshund" and I was just trying to be consistent and smooth, wasting as little energy as I could for the next 4 hours until the race was over. Lap 4 was slower significantly than the other 3 and I had to stop again at the end due to severe pain in my nutsack and my shoulders were getting really tired. I was paying for my time off my bike for sure.
I set out on my 5th lap and got about a mile in and nearly crashed twice, once hard, because of stupid stuff and I said enough. I turned and went back to my car and called it a day. My experiment was over and I got what I came for.

I ended up 8th in solo and know that I just need to ride more and ride my mtb more to get back to where I was before my time off. With that, I have two more long events (a 6 hour and a 75k monstercross race) with the option for a third depending on schedule conflicts, planned for this year. I am doing a full load of cyclocross in the fall/winter and then we will see about a bigger schedule for next year. My main thing is to have fun and remember why I race in the first place. The past year has been very hard for me personally and I am thankful and blessed to just be able to ride my bike.

Everything else is just a bonus.
Posted by Duckman at 10:13 PM 1 comment: