Poor Jack Torrance all holed up in the mountains in Colorado with a ginormous amount of snow, Olive Oyl on his case all day and his kid running apeshit wild over the place. It's no wonder he went nuts. One thing can be said about this winter in North America, all the Meteorologists, Almanacs, Wolly Worms, groundhogs, and old people with their gout acting up were right. 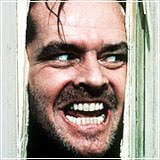 This winter has been a doozy.
It has been tough to be an athlete in this stuff too. I have been on my trainer more than I have been outside and now that my days are temporarily free due to being unemployed, I have a lot of time on my hands. This can be good and bad. I am used to being really busy and my mind doesn't do downtime very well. I have been planning how I am going to spend the rest of my life both on and off my bike and looking at options like school (hmm, wonder if I can get a mountain bike scholarship...hmm...)

Now that Cyclocross season is over (for me. There's a few races I could still hit but cash is an issue right now) and it continues to snow every few days, my riding is gone to base building mode and I have managed to get some good rides in depsite everything else. I have even been in the mountains some which is something I don't normally do in January.

Steep!
I went with my buddy Bob Lamberson to Tsali a couple of weeks ago and we were blessed with a great day to ride:

Really, even though I am making the best of this like everyone else in the country, I am over winter. Instead of Groundhod Day, I am going to make Save This Kitten Day. That is, if I don't see Spring soon, very, very soon, I am going to shoot this kitty. 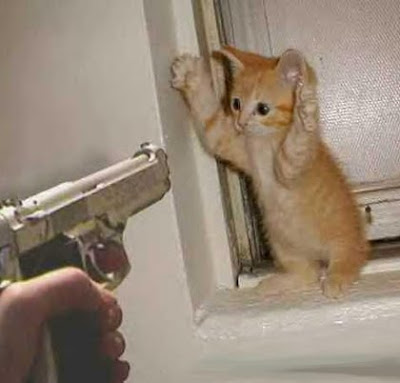 The 2009/10 Tennessee State Cyclocross Championship Race rolled, er, slid its way into Winged Deer Park this past Sunday amid what was touted as the "Storm of the Century". Overnight, rumours ran rampant about massive snowfall amounts, enough to lose Gary Coleman in. Bread and milk shortages, random senseless acts of senselessness and up to but not including total anarchy.

I woke up Sunday determined to stay snowed in. My January so far has been total shit and there is no way I was going to take a chance on having fun on the last day of it. My fate was sealed when I turned on my computer to watch some of the live coverage of the Cyclocross Worlds going on in the Czech Republic. After watching that for a bit, I loaded up my Vassago Optimus mountain bike ( I figured there was a better chance of taking it with the conditions than there would be on my cross bike) and headed out.

I got there in time to get registered and ride a few laps of the totally covered-in-snow-and-slop course and at that point almost went back home. It was tough. By normal standards it was nothing too technical and would have been fast. Add 5 inches of snow and it was like riding in deep sand and someone ran the Pamplona Bulls through with a bad case of diarrhea. I talked myself into staying and chatted with some of my friends until time for the race to start.

I got a crappy starting spot and came off the line in nearly last place. Fighting for a good position before we entered the course off of the starting straight, I managed to get a decent spot. There was zero places to pass. I went out in the deep snow, out of the racing line (if you can call a shit colored wet line in the snow a racing line) and ohboy that was tough. There was absolutely no settling in on this course. No place to recover. By the second lap I was so far deep in the red zone, I thought I was going to puke. I had made it up to 7th behind my buddy Rich Kidd and had brief moments of thinking about challenging him. Rich is strong and a good bit younger than me so I doubted I could make a pass stick but I still tried to get close enough.

I dug too deep too long though and settled in somewhat in the last half-lap and cruised on home in 7th.

I was happy that I did go out and try. I had fun and that's something that I really needed.

Many, many thanks to Dwayne Letterman and all the volunteers that work selflessly to set-up and take down the courses and all the other myriad of tasks that go into putting on a MSG race.
Posted by Duckman at 2:54 PM 1 comment: