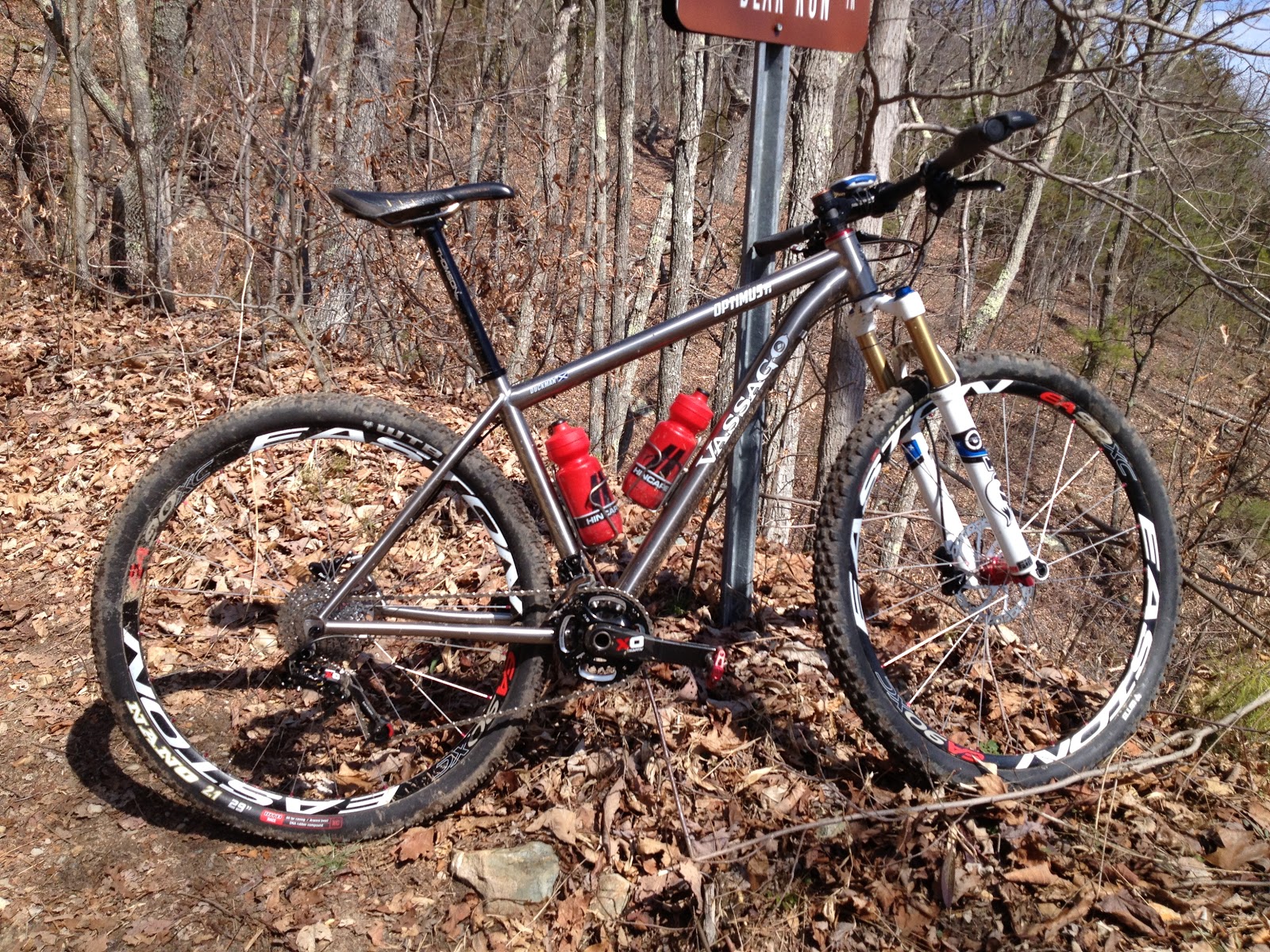 Anticipating the arrival of my 2013 Vassago Optimus Ti for several weeks, I was really excited when Fed-Ex dumped off some very conspicuous boxes earlier in the week. I unboxed and drooled over each piece and set them aside for a few days until I had time to build it up. I got it done and could not wait to get on the trail to see how it would ride.
I have owned every iteration of the Optimus since its inception so I have a wealth of experience to compare this one to all its cousins. Tom @Vassago had been telling me how different these frames were going to be from the others and I noticed some big (literally) changes right off the bat. 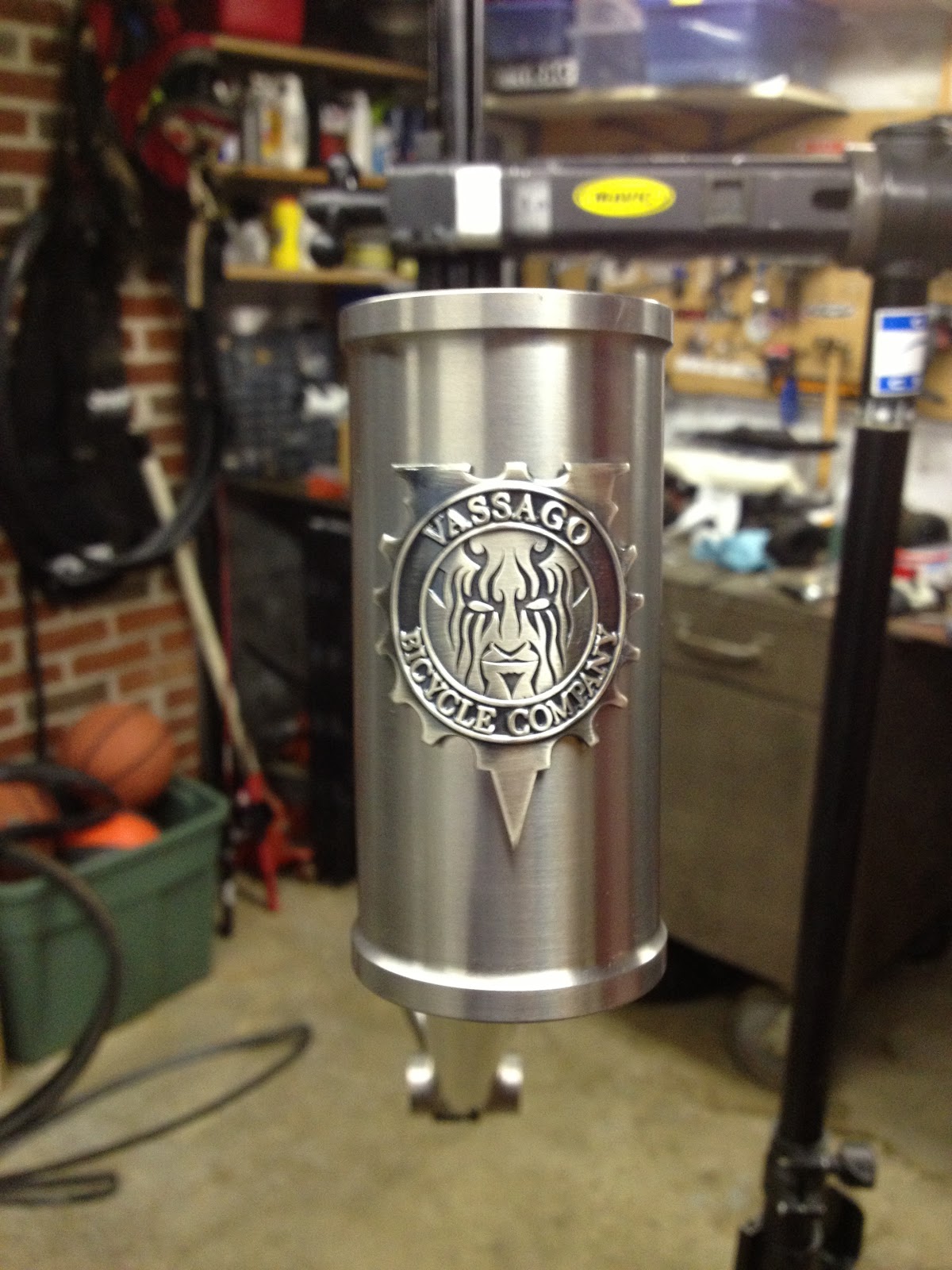 Changes like the fat 44mm head tube and the beefy bottom bracket that went from 68mm to 73mm on the new frame. 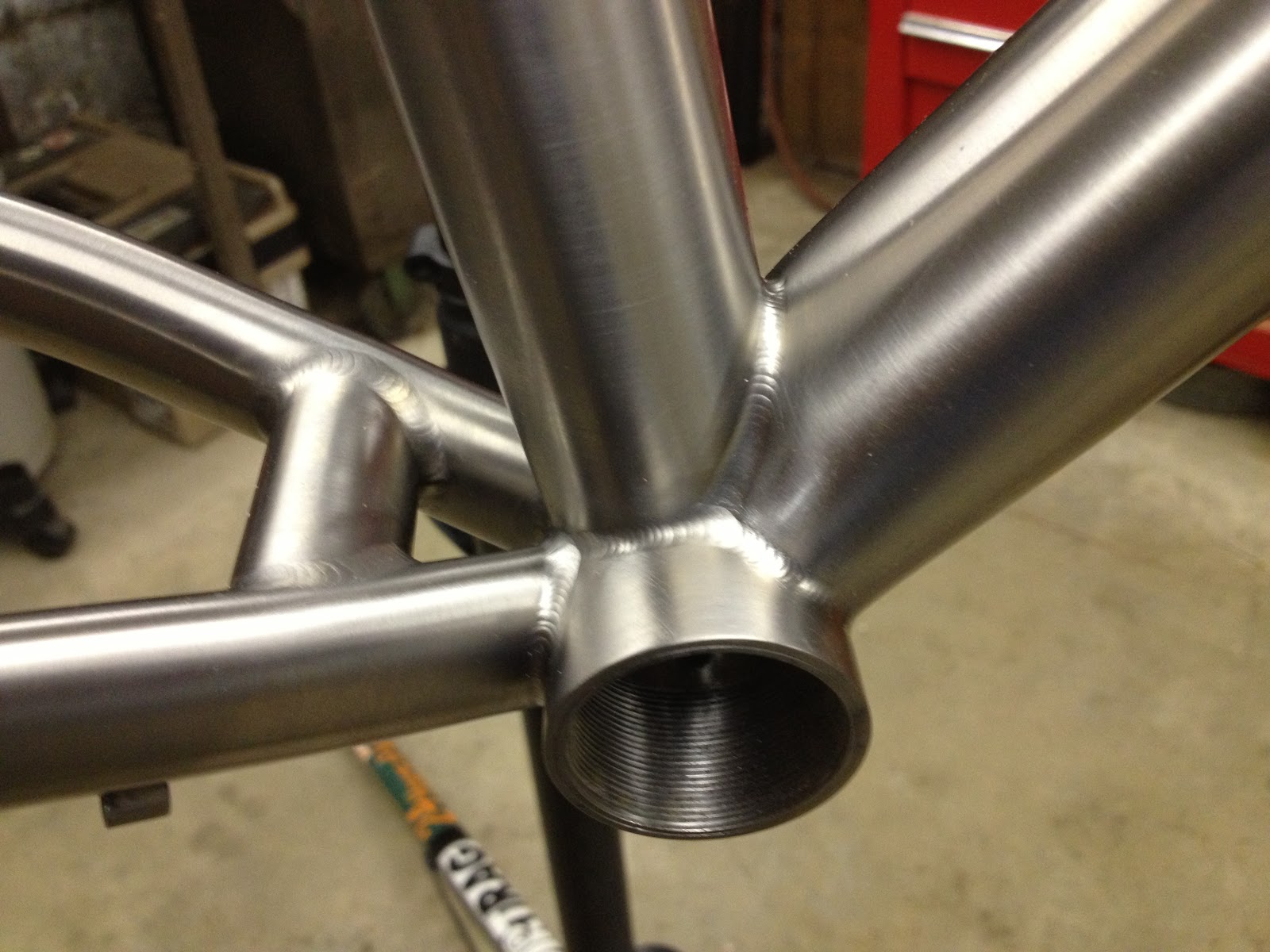 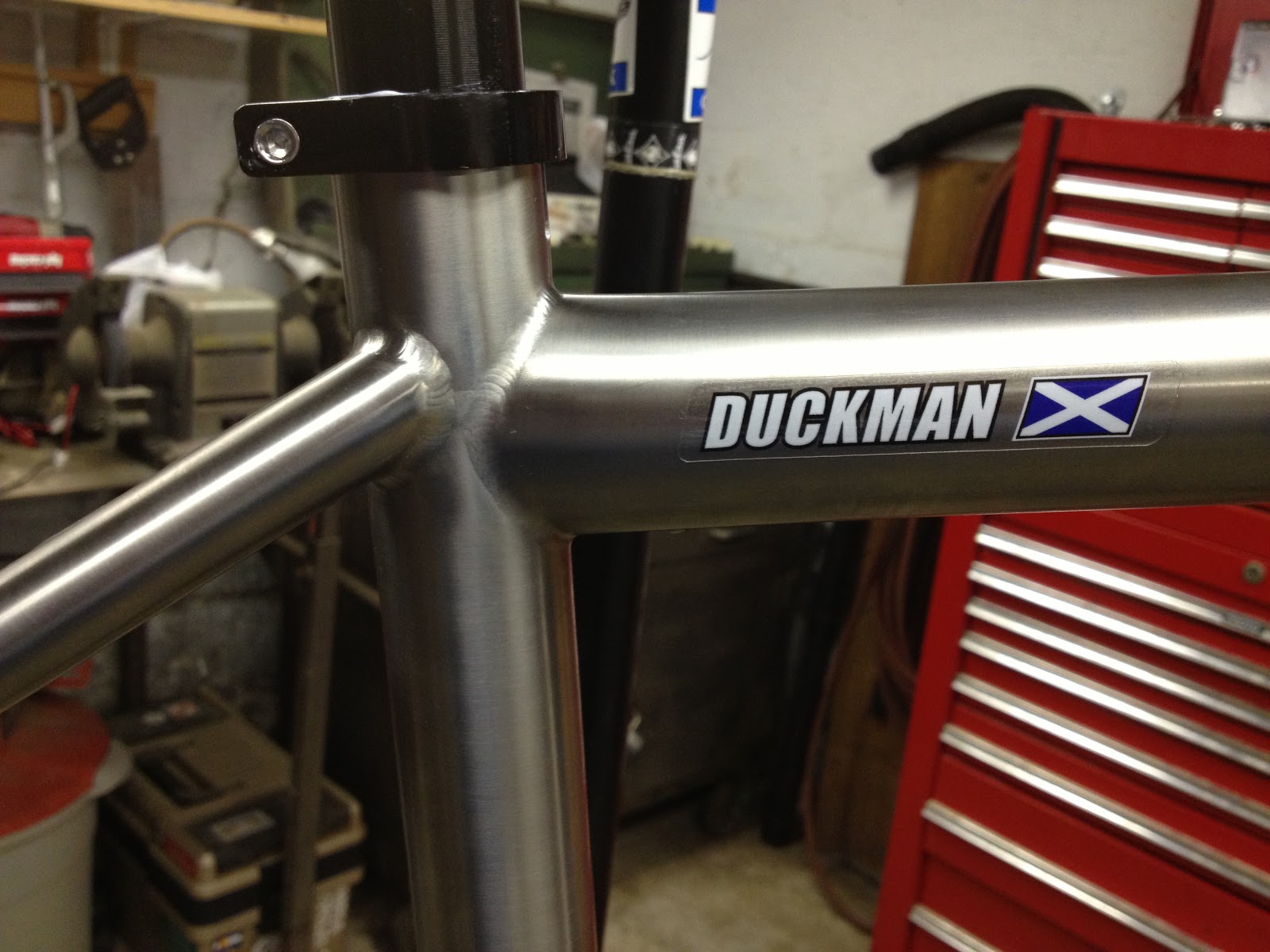 All the tubes are slightly bigger yet the frame is still just over 3lbs which makes me curious about the butting in the tubes. The welds are pure art. 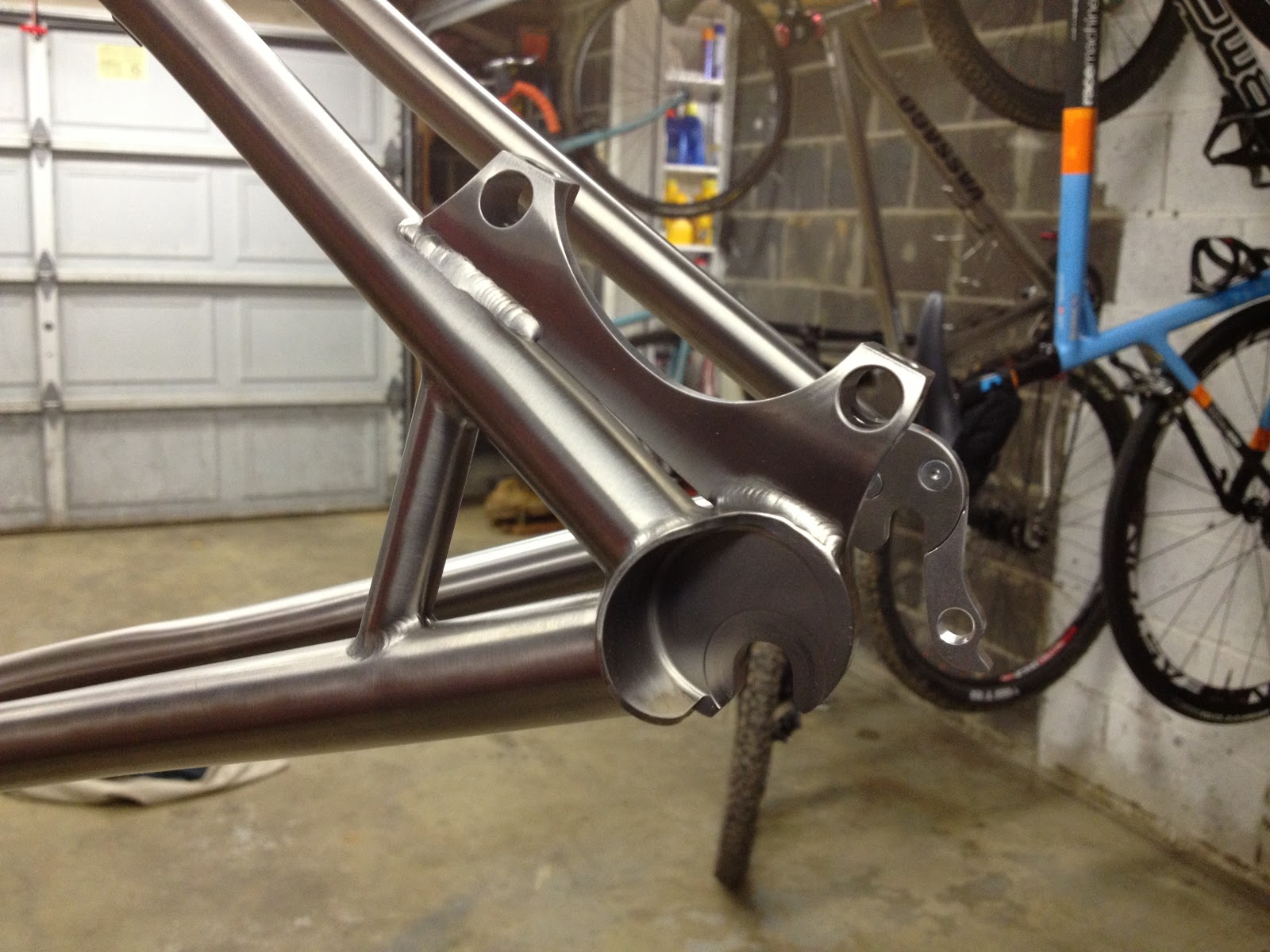 Another piece of art is the one off vertical drops they made for me. Production frames are all going to have Paragon Sliding drops like earlier versions. Nothing wrong with sliders and Paragon ones are the best. I got vertical ones on this frame because I am special (plus I have a Optimus SS already and this bike is forever going to be geared)
Enough bike geek love. How does all this stuff feel on dirt? Glad you asked. Immediately after my first ride (and I mean immediately, I was still in parking lot and had bike gear on) I shot Tom @Vassago an email with the subject line: Holy S**t Tom! and that was pretty much the first thing that entered my mind within the first mile of singletrack I rode. This thing feels amazing. It feels strangely like a carbon frame in the way small bumps just aren't there. I never knew how flexy the older Opti frames felt until having something else to compare them to. The new Optimus handles amazing. Having not seen the geometry yet (Hey I trust my peeps! I just said build me a bike and make it ride sweet) I can't say where the difference is but I am guessing it's in the tubing and it looks to me like the head and seat tube may be kicked back a half a degree, I am not dure about that though. I do know the "Wet Cat" geometry should be called Wet Cat on Crack geometry now. I pushed this bike in the twisty stuff just to see if I could get it to fail in some way and I did over cook some turns and drifted a bit but the effort it took to get there surprised me. This bike is stable and turns are unbelieveble. Onto faster, forest service type roads, the bike kept on delivering the goods with great handling and stability. There is one rocky descent that normally makes me a little nervous because most of the  baseball sized rocks aren't attached to anything and I felt much more stable and descended quicker than normal.
A couple of component highlights worth gushing over are the SRAM XO 2x10 group, specifically the type 2 rear derailleur and the brakes. The T2 derailleur has a tiny clutch inside that prevent it from moving forward freely and that all but eliminates chain slap. It is freaky to ride a geared bike through a rock garden and it be as quiet as my singlespeed.
I have ridden Formula brakes for the last decade and Hayes before that. I had heard some horror stories about Avid discs and was a little concerned but after today, no more. Set up was simple and since my brakes had about 3 miles of extra hose once I got them in place, my set up included bleeding both brakes. Bleeding is probably the most complicated thing you can do with hydro discs and these weren't bad at all. Stopping, modulation and lever feel are super.
I really can't say enough good stuff about this bike. They are legit and have stepped up their game in the 29er market. But don't take my word for it, find out for yourself. You will be glad you did.
﻿
Posted by Duckman at 9:32 PM 6 comments: