The fat lady has sang on my 2013/2014 racing season and by all accounts, it was a successful experiment for me. I say experiment because it was just that. I have a job that I love - a lot. The thing is, I am good at it and because of that, I get a lot more of it. It is a huge blessing. Combining that with bike racing and the requirements of training and thinks get a little.............. challenging.
In 2012 I had the same job and I rode my bike when I could, all outdoors and generally pretty hard since my rides were limited. I stressed over training and schedules and crap. It was stressful. Not why I race bikes!
I went into the Cyclocross season and had my arse presented to me, not on a platter.. nope I wasn't good enough for that even. It was given to me in a Glad bag. Out of the 11 or so races I did, I never even cracked the top 5.

I needed a new plan.

What I came up with was nothing new, not at all. It was bad medicine though and something that would take a lot of determination to pull it off.

I moved it indoors. I rode my bike like I normally would if I had all the time in the world. Sometimes that "time" was 4 am and other times that time was 9 pm (after working 10 or 11 hours) but I did it. I still rode outside too when I could, on average once a week. It took me about a month to get past that feeling of being stuck in a Turkish prison with a bike trainer and a minion with a stick to keep me honest

and to be honest, some days I was scheduled to train I just couldn't make myself do it. I'd rather stab that minion in the throat with an ice pick instead of getting on that bike. I learned a lot though and the experiment showed me that an indoor trainer can get you into pretty amazing shape if you just do it.

Now it's January 2014 and time to take what I learned and expand on it. I start racing again in March with the "classics" Tom Dula's Revenge, Boone Roubiax, and the Love Valley Roubiax. Those will get me some outdoor miles to take to my first race ever in the west - The Whiskey 50 in Prescott AZ. I get to go race and hang out with my friends from Vassago Cycles for a few days in April. The second part of my year is a little foggy because of races not having dates set just yet but (in no particular order) I am looking at the Iron Mtn 100K, Tennessee State Championship MTB race, the Sugar Rush 6 Hour Race, the Fall Fear MTB race,  and a couple of road races - the Roan Groan and Benge's Revenge. I like those just because they have a buttload of climbing. Before cross rolls around again, I am also going to do a couple Gran Fondo type events - the Beech Mtn Metric and the Alpine Loop Gran Fondo. These both are special because of the EPICNESS of them.

All this gives me something to get on my trainer for and a reason to stay fit. Life is about living and your body is about moving. Move it or lose it....

Posted by Duckman at 9:01 AM No comments:

First let me say Happy New Year to everyone that happens to see this. How was your 2013? Was it everything you hoped for (and committed to do on Jan 1 2013)? Can you make 2014 even better?

I think you can..

We are all creatures of habit and many of those habits are no bueno for sure. You just have to decide what you want, when you want it, and 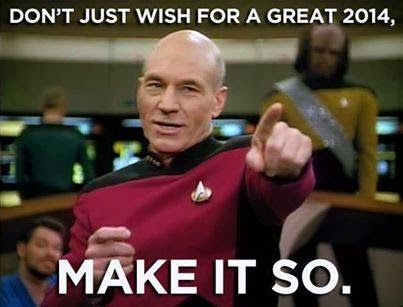 I noticed several people on Facebook posting their yearly miles ridden and I wondered what mine looked like. I never keep track of miles but thanks to modern technology, I don't have to. This year was dramatically different than years past because I spent a lot more time on my bike inside. Just because I work a lot is no excuse for a weak engine. With a quick look at Strava, Ridewithgps and Trainer Road I found that I rode a little over 1500 miles outside....ugh. Kinda weak from my pre-responsibility days of 8 and 9K years. What surprised me though was the fact that I rode nearly 2K miles in my basement. It took some determination and there were some days that what was planned and what was done were worlds apart but it was all blue-collar engine building...

I started 2014 out with an actual ride on actual roads in the cold (but sunny) clear blue world and it was nice! Three hours of shammy time reminded me that while being a hermit holed up in my basement busting out 2x20 intervals will give me a big engine, it's the outside and roads and trails that stoke my fire.

I need that engine though. I have a few biggish events that I am doing this year like the Whiskey 50 in April and the Alpine Loop Gran Fondo in September and a few other things (mostly in dirt) that I am waiting on dates to be announced for. In the meantime, I am doing a 9 day, mid-winter stage race Jan 25 - Feb 2'  The Tour of Sufferlandria. Nine stages, several mountains, a lot of pain and I won't move an inch. It's all indoors...