500 miles and the scenery never changes. 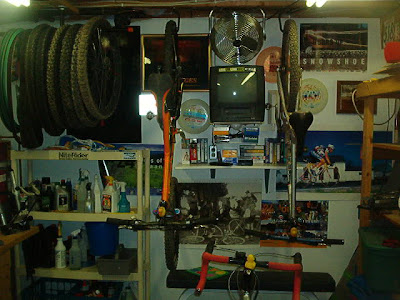 Things that drive you insane. Like a hamster on a wheel, I have pedaled 494 miles in my basement since Dec 1 and I am sick of it. Not sick like I am about to puke sick but sick like I am hanging onto reality by a very small thread and it is about to snap.

You know the kind.

Winter is almost over and soon I can get more riding outside and everything will be ok then. I am just glad I live in a place where Winter really isn't a big deal. I can't imagine what the folks do in Minnesota.

The Icycle is this weekend. I have a decent base of fitness but virtually no top-end stuff except what I have left over from last fall. Still the Icycle really isn't that kind of race for me. It's more of a novelty - something to do mid-winter while I wait for the Earth to move back to its rightful spot a little closer to the Sun. Plus, the Icycle is really to short to be a race, it's less than 2 hours and that's hardly enough time to get warmed up.

There will be racing though and the usual debauchery and tom-foolery that is associated with a large group of mountain bikers consuming alcohol.

I'll have a report and some pics from the weekend when I get back.
Posted by Duckman at 7:19 PM No comments:


I always liked ole Johnny boy. You gotta give Sly credit, he still looks pretty damn good for an old man. I mean what is he 60 now? You think that boy has used any performance enhancing drugs in his day or or he a product of clean living?

Either way, I am watching his movie today. It isn't like I am going to get much else done. I am sick as a dog. I thought I was going to get through this winter ok but it just wasn't in the cards. I started feeling funny after Wednesday night's Buffalo ride (it was 22 degrees) and I only rode my rollers for about 20 minutes on Thursday. Yesterday was tough. I came home from work and did nothing.

I don't do sick very well. I hate being still.

I've been reading the news and it looks like the NUE Series could be pretty exciting this year. Chris Eatough has announced that he intends to defend his title. Add Floyd Landis to the mix and a few of the other really strong guys out there, I could get exciting.

All I know is five races, five hundred miles, and five chances for me to see Chris and Floyd's bony asses ride away from me.

I am registered now for two of the five races on my schedule that are part of the National Ultra Endurance Series. There are eight races total but I can't make three of them due to conflicts and the fact that they are on the other side of the country.
I read the other day that Floyd Landis is going to throw down for the series. That's cool and I can't wait to meet him. There is volumes of stuff on the internet both for him and those that bash him for being a doper. I cannot say if he is guilty or not. I have my opinion and part of that is I am skeptical of the French and their methods of drug testing but that's about as far as I am going to go with that.
I like Floyd and I am looking forward to racing with him (well by racing with him I mean racing on the same course he is also racing on while we are both um....racing. Not that I will actually be racing racing him).

I have a pretty ambitious schedule this year for a 41 year old, full time job with a kid weekend warrior but I think it will be ok and it will be interesting to rub shoulders so-to-speak with some truly elite riders.

Some of my goals for the year are:

To finish all my races.

To podium in each of the three cycling disciplines I will be racing in (MTB, Road and Cross)

Stay healthy and have fun.

Come back in December and see how I did.
Posted by Duckman at 5:03 PM No comments:

I thought I'd post up a retrospective of 2007 and some highlights of what was a pretty big year for me.

It began with a good bit of trailwork in the winter. I have done around a 1000 hours of trail construction and maintenance in the NE Tennessee area over the last several years. Building up trail Karma doesn't get you much though, by February I had a nasty one of these:

I had to sit out the first two planned races of the Year, the Icycle and the Knobscorcher. I did finally get on my bike for the 12 Hours of Tsali in May with little fitness to speak of but a large capacity for pain.

Next up was the Burn 24, my first solo 24 hour race. I only had about 700 miles in my legs by the time the Burn came about and I was about 15 pounds heavier than I had hoped to be but things happen that way sometimes. I did have great help though:

It was a good experience and a good first effort. It turned out to be much more difficult mentally than physically. I lost my motivation somewhere after midnight and didn't find it again until about 5:00am.

In the end, I was happy to have finished and I had a wealth of knowledge that would help me in the next one.

The Burn was significant for another reason. You have alot of time on your hands riding in circles for 24 hours and I spent a portion of that time talking to Dicky about 29ers. One thing that stuck in my mind was how Dicky (who is at least 50 lbs lighter than me) coasted away from me everytime we went down a hill. I did some research (not enough as I would later find out) and showed up at the Cowbell Challenge in June with a new ride.

Was bigger better? I was gonna find out. The plan was to ride both bikes and compare. I started on the 29er and never rode the 26" Dean again.
As fate would have it, the bike I had ridden for the Cowbell broke and the company dragged their feet in replacing the frame. I had the Off Road Assault on Mt Mitchell in 2 weeks and no bike to ride. Enter Jeremy Arnold and Vassago. Jeremy had been riding Vassagos for awhile and was really raving about them. A couple of emails and a phone call later and J hooked me up.

I was more than a little impressed with both the service from Vassago and the ride. I went to ORAMM with only about 8 miles on the new bike and knocked over 2 hours off of my time in 2006. Not bad. What happened next floored me. Monday after ORAMM, I got an invite to join the Vassago Endurance Team for the rest of 07 and 2008. I didn't know what to say other than hell yeah!

I also hopped on some bald skinnys for a few events during the summer.

I swing that way from time to time.

I was digging my new bikes and couldn't wait to get into action on my new team. I entered the Fool's Gold 50 in August as it was sponsored by Vassago and promoted by teamate and future teamate Namrita and Eddie O'Dea. The North Georgia course was brutal yet alot of fun and I took good notes for my trip back in '08 where I'd be doing the 100 instead of just 50. 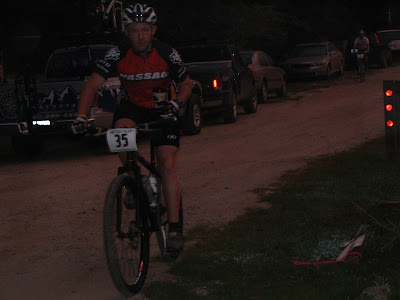 Yes I am drinking coffee. Yes the race started before daylight.

I had a decent result in Georgia and also a month and a half later in Blacksburg Va at the Rowdy Dog and again in November at the Treeshaker 12 hour race in Charlotte. I got second at the Treeshaker in 06 and was hoping to do at least that in 07 but there was a mucho deeper field this year and it just didn't happen. I also may have overdid it at the end of the year as I was doing Cyclocross and Endurance races in back to back weekends. I did 6 races in 5 weeks, one was a cross race on Saturday and a 40 mile endurance race on Sunday. It was tough. It was good fun though.

With all the grace and beauty of a 800 pound Gorilla.

I had a great year, made some new friends and rode my bike alot. I almost made the podium in three different cycling disciplines which is kinda cool and I took a big leap personally over anything I had done before.

Posted by Duckman at 7:46 PM No comments:

The 6th Annual Iceman Cometh (with a hangover) ride was held Saturday January 5th in Damascus, Va. Originally held on New Year's day and in any weather, the ride has since evolved into the first weekend of the year to allow those that don't get off of work on New Year's a chance to ride. It is still held no matter what the weather which has ranged from sun and 60's to rain and snow mix and 30something.

This year it was just cold with some snow on the ground.

The ride starts out innocently enough with 5 miles on Virginia's famous Creeper Trail but the innocence soon gives way to the evil that lurks just beyond the Creeper and on the Iron Mountain trail system. Miles and miles of rolling ridgetop singletrack littered with babyhead rocks and nice fireroad/singletrack descents off the side of the ridges await those who can brave the opening 1 mile climb up Beechgrove from the Creeper Trail.

The Iceman lost his head.

Regrouping at the bottom of Feathercamp Ridge

After a few hours of the Iron Mtn, you are treated with the descent down Mock Holler, a roughly 1 mile drop that is really rocky and always fun. I had a blast despite still recovering from the bruised lung I got back in December. I was coughing and hacking like a chain smoker pretty much the whole way. It was still fun though.

Christmas came and went at the Duck Ranch and it was a blast. We had a good few days off of work and school and got to hang out and do whatever we wanted. Nathan got a new bike for Christmas so we went out Christmas day and gave it a test ride at Warriors Path State Park. I decided to take my road bike and although we only live about 7 miles from the park, I could stretch it out for 2 or 3 hours on the ride home.

Nathan was pretty happy with his bike. It is the first true mountain bike he has had complete with gears and a suspension fork. He made it to the top of this hill for the first time ever without having to push,

After awhile at the park, it was time to go and I headed out for a long, slow base building ride. I had about 4 hours before we had to go do family stuff. It was a great day to ride, kind of cold but not that bad.

Riding on the bike path was fun but wasn't doing much for my fitness.

I have good roads to ride.

Those black specs are wild Turkeys, forty seven to be exact.

I look mad. Dunno what that's about.

I cruised for 3 hours and then made my way home. I passed home after home and could smell Christmas dinners being cooked and I had enough. It was time for some good food with no guilt.

After dinner, I played with my new toy some.